The Rodney Report: Budget from Hell

Readers of this week’s e-newsletter from the office of Representative Rodney Frelinghuysen may well have wished for a piece of paper to flip over in search of the real news.  Absent from the litany of achievements was any mention of the massacre in Las Vegas that gripped so many of his constituents, let alone any fruitful conversation on how the federal government might work to reduce the frequency and death toll of such horror. He was able to discuss some policies protecting children on the internet but didn’t mention that he’d allowed ChIP, the federal health insurance program for children, to lapse, or say when he might get around to covering the 9 million current recipients.

Most telling, the newsletter also failed to mention that Rep. Frelinghuysen was one of only two New Jersey lawmakers to vote “yes” with a slim partisan majority on a budget resolution, a bill not only devastating in itself, but designed explicitly to soften the passage of a GOP tax plan that promises to cost more than a quarter of household in New Jersey an average of over $2,400. One wonders how he could stay silent on such a move.

Last week Congressional Republicans displayed an ironclad determination to pass the tax reform they want without a smidge of Democratic help (or even opinions). The cornerstone of this effort is a parliamentary maneuver called reconciliation.

What does that mean, exactly?

Budget reconciliation kicks off when the House and the Senate agree on a resolution containing “reconciliation directives” aimed at specific budgeting committees. Reconciliation rules then allow Congress to push these bits of the budget through faster. For example: In the Senate, a reconciliation bill isn’t subject to filibuster, and it’s not as easy to draft amendments to it.

Crucially: Spending measures covered by reconciliation only need a simple majority in the Senate – not 60 votes as is usual for budget bills.

So this is a great way to fast-track certain tax, spending and debt-limit measures, especially if you know others will think they’re horrendous. GOP leadership hoped to use reconciliation to fast-track a repeal of the Affordable Care Act, but fell short of the 51 votes needed in the Senate.

GOP leaders claim all this would be unnecessary if Democrats would only play ball. Democrats insist they’d be willing to work with Republicans on a tax package that gave the middle class a fairer shake. But that isn’t the vision motivating the GOP.

“This is the most conservative budget in 20 years,” said House Budget Committee Chairman Diane Black (R-Tenn.). “The vision in there, if we were to follow it, really could change the trajectory of this country.”

Black’s House budget is committed to “revenue neutral” effect, so in preparing for tax cuts that will take an estimated $1.5 trillion out of the federal coffers, the House needed to cut that amount in spending preemptively.  While few Beltway observers think the non-binding budget will be implemented as is, GOP leaders found ways to make the math problem work while showing how little they value working people in this country.  For example, they did not touch the approximately $70 billion increase to the Defense budget, but they did find just the right amount to lop off of all federal healthcare programs, including Medicare and Medicaid, safety-net programs for struggling families, supports in education and research for all of us. 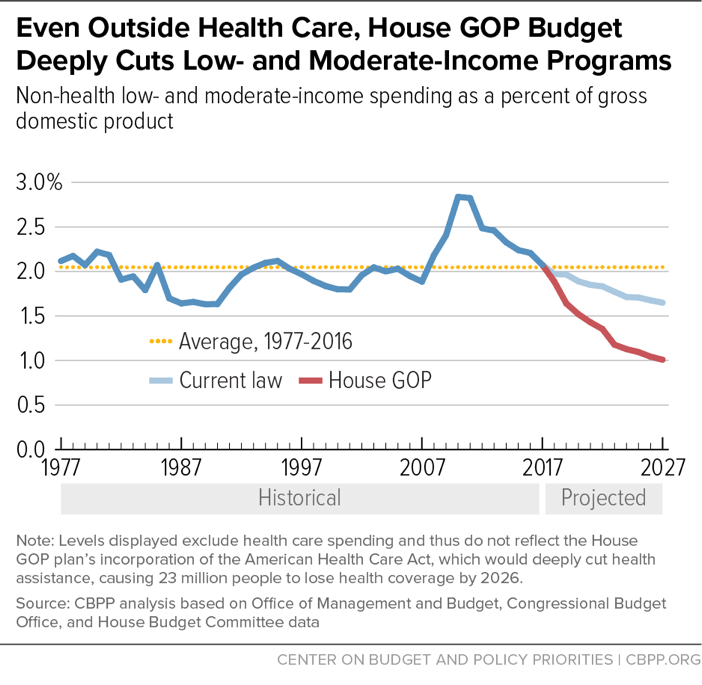 The impact in NJ: Tax cuts for the rich, tax increases for 35% of NJ taxpayers

So, what role did Rodney play in the great budget game of 2017? Once again, our Congressman voted for a policy that would have disastrous impacts on his home state--and he knows it. Once again, he says he hopes the problems will be fixed in the Senate. Hmm, where have we heard that before?

On Thursday the House voted on a budget resolution to make it easier to pass the President’s tax plan (see our handy “What is Reconciliation?” primer above).

While nine of the Jersey Delegation, including three Republicans, opposed the measure, Frelinghuysen and Tom MacArthur (NJ-3) voted yes.

Effects of this tax reform plan on New Jersey would not be pretty. It includes a proposal to end the SALT deduction for state and local property taxes--an idea that both Phil Murphy and Lt. Gov. Kim Guadagno, the major-party gubernatorial candidates seeking to succeed Chris Christie, call  “a disaster” for New Jersey.

In fact, in September, NJ reps including Frelinghuysen sent a letter to Treasury Sec. Mnuchin saying that eliminating the SALT deduction "unfairly penalizes residents in high-tax states like New York, California, Illinois, and New Jersey, where middle-class families can least afford another tax increase. Faced with an already high tax burden and high cost of living, our communities cannot afford another increase to their taxes.”

This may be intentional on the part of red-state politicians.

“Many Republicans from the low-tax red states see this as a means of exerting pressure on the blue states to keep taxes down,” says Chris Edwards of the Cato Institute, a libertarian “free market” think tank. "Over time, if they eliminate the deduction, there would be more incentive for [legislators] to lower property taxes.” Red-state legislators consider this to be more fair, since most red states don’t use the SALT deduction and therefore, they reason, pay an unfair share of federal taxes. But that math doesn’t work out. New Jersey is a “donor state,” meaning for every dollar in taxes paid by New Jersey to the federal government -$0.77 comes back, according to Fortune magazine.

But there’s more bad news in this tax package. The proposal is designed to benefit the richest 1% while giving only the most minimal cuts to the lower 40% of taxpayers. According to the Institute on Taxation and Economic Policy,  New Jersey would be one of the hardest hit states under this proposal.

“No matter how the GOP messages this plan, it is nothing more than an upward redistribution of wealth,” said Alan Essig, Executive Director of the Institute on Taxation and Economic Policy. “Not only does the plan boost the incomes of the wealthy with surgical precision, it also gives a pittance to most working people and it taxes some in the middle and upper-middle class more, essentially creating an even greater economic divide between the rich and everyone else.” 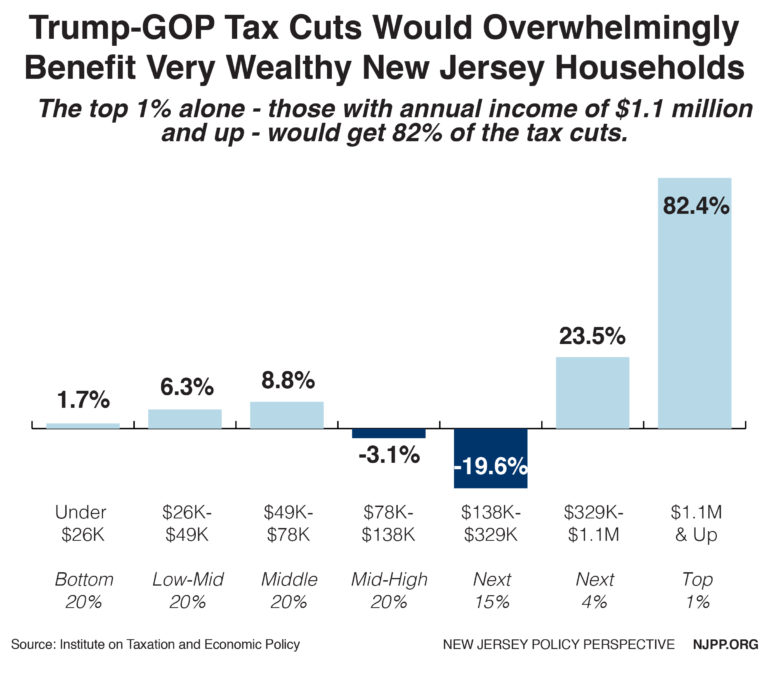 According to the ITEP, the richest one percent of New Jersey residents would receive 82.4 percent of the state’s total tax cuts under in 2018. These households are projected to have an income of at least $1,105,200 next year. The framework would provide them an average tax cut of $73,950 in 2018, which would increase their income by an average of 2.3 percent.

Interesting to note that many of Frelinghuysen’s constituents fall into the income sour spot that may actually see their taxes go up. In New Jersey, the average taxpayer with earnings between $77,800 and $328,700 (the fourth 20 percent and next 15 percent) would face a tax increase of up to $3000 under the framework (1 in 4 Garden Staters will pay an average increase of $2400 a year) .

Tax cuts for the rich but tax increases for 35% of NJ taxpayers. And the state’s low-income working families could also lose big, particularly when one considers the potential cuts to essential public services and safety net programs that are being taken up as companion measures.  The state also will have to grapple with the proposed budget cuts the GOP would use to fund these tax cuts, including slashes to SNAP (20%, affecting 900,000 NJ residents) and huge cuts to Medicaid (used by 1.8 million NJ residents). $1.5 TRILLION. How will the state make up that funding loss?? And it supported reducing Medicare spending by $487 billion during the same period. How will that affect NJ seniors?

We wonder: how will these tax proposals benefit Congressman  Frelinghuysen? As one of the wealthiest men in Congress, he is perfectly positioned to reap huge benefits. How much will he get? Shouldn’t he put his constituents first?

A Moment for Dickey

So often we hear the increase in injury and death by firearms described as an "epidemic." It's accurate: Gun violence causes death and damage to the body and to communities, and it's effects are spreading.

But for the past 20 years, the Center for Disease Control and Prevention has been stymied in studying this epidemic. Wouldn’t it be handy pull up statistics comparing the number of accidental or deliberate illegal deaths by firearms with the number of serious crimes that were stopped by “a good guy with a gun?”  But In 1997, thanks to strong lobbying by the NRA and other gun groups, the "Dickey Amendment" passed, preventing federal funds from being used to "advocate or promote gun control."

That means if the CDC did some research on gun violence and found out that say, background checks or limiting rounds, would significantly save lives, they could not use the research to develop effective life-preserving policies (know many people with polio? Clear on the effect of second hand smoke?). For 20 years, members of Congress have argued this amendment stifles research and in the Appropriations Committee, they've tried to repeal it. Year after year they have been unsuccessful -- including this year with Rodney Frelinghuysen as chair. The proposal to repeal it was introduced again by Reps Nita Lowey and Rosa DeLauro this year, and again was defeated, leaving the ban in place.