Primary Primer 4: Democrats on the Issues 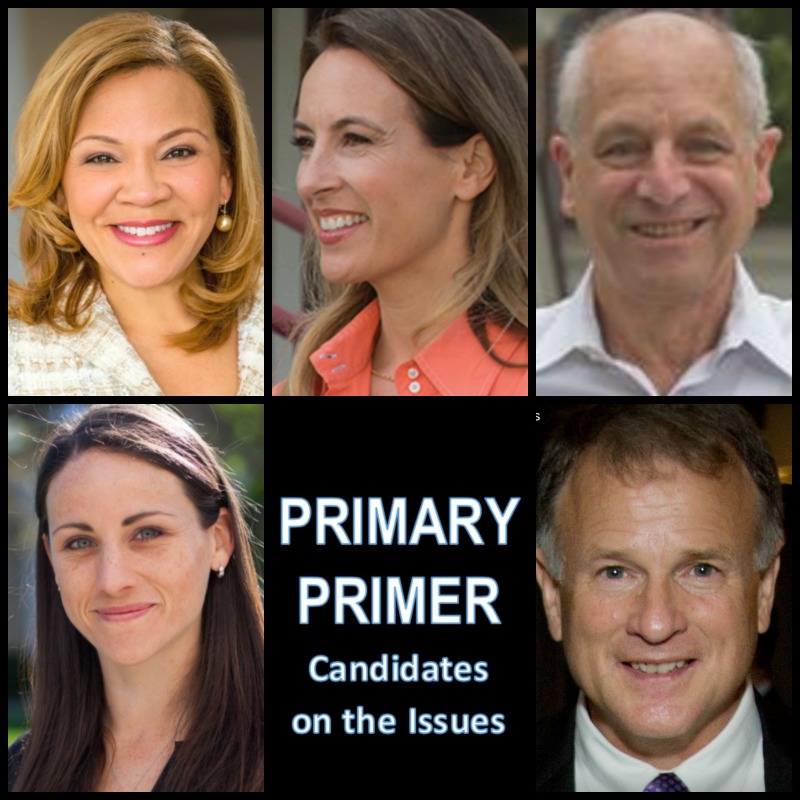 Democrats on the June 5 primary ballot.

Note: Fourth and final post in a series providing background about contenders in the NJ 11 congressional race.

Less than a month to go to the primaries! Still looking to become a more informed voter? Here are highlights about what the Democrats in the 11th District congressional race think about key issues. For additional information and perspectives, be sure to follow the links in the text.

Background for these profiles came from the articles and websites linked, in addition to the writer’s notes from a candidate forum in April 2018.

Heslin, who entered the race most recently, has a straightforward summary of issues positions on her candidate website, along with links to more in-depth information.

Climate change/environment: Given her background in science and research, perhaps it’s not surprising that climate change tops her issues list. She proposes specific remedies such as investment in renewable energy, committing to energy-efficient technology and modernizing waste management techniques.

Infrastructure/economy/taxes: Urges “investment and innovation” across the board; stresses importance of funding the currently underfunded Gateway rail-tunnel project connecting New Jersey and New York City. Advocates “a tax system in which wealthy and corporations pay their fair share, in order to adequately fund public services without overburdening middle income earners.”

Immigration: Calls for ending deportations of law-abiding residents; urges passage of DREAM (Development, Relief and Education for Alien Minors) legislation to grant permanent residency to those brought to the U.S. as children. Stresses the need to avoid criminalizing immigrant populations and to base policy decisions on a clearer understanding of immigrant populations.

Racial justice: Says “comprehensive, national data” on law enforcement’s use of force is needed to address inequities in how Black individuals are treated by police. Calls for greater public investment in areas such as education, infrastructure and environmental cleanup to address the ways in which problems in these areas disparately affect Black citizens.

Healthcare: At a candidate forum in Madison in April, Heslin said that having lived and worked in the UK and Austria, “I have to imagine the U.S. can do so much better.” She favors Medicare expansion as a way of continuing the Affordable Care Act’s success in increasing the number of Americans with health coverage.

Gun Safety: At the April forum, Heslin noted the huge number of guns already in private hands in the United States, and said she favored a buyback program, along with background checks, a reinstatement of the assault weapon ban, and shutting off access to guns for domestic-violence offenders.

Economy, taxes: Sherrill decries the Trump tax plan as a “giveaway to the wealthiest Americans,” with the elimination of the state and local tax deduction (SALT) as particularly bad for New Jersey’s middle class. She urges building on what she describes as New Jersey’s strengths — an educated workforce, a tradition of innovation, and excellence in scientific and technological research. Sherrill stresses the need to keep more of New Jersey’s tax dollars closer to home. New Jersey receives only 74 cents for every dollar sent to Washington (compared to Mississippi’s $2.13 in 2015). She supports renewing regional infrastructure, including the Gateway tunnel project, as a boost to the state’s economic health.

National security: Sherrill’s policy statement emphasizes containing nuclear threats posed by North Korea and Iran and remaining vigilant about ISIS, while seeking greater support from U.S. allies in working toward these objectives. At the April candidate forum, Sherrill also talked about the importance of addressing and defending against cyberattacks.

Healthcare: Highly critical of Frelinghuysen’s “Yes” vote on an Affordable Care Act (ACA) repeal, Sherrill expresses a strong commitment to affordable care for all, while stopping short of a Medicare-for-all approach — at the April forum she noted “I have to see a plan” and make sure any solutions would not add to the burden carried by the state’s taxpayers. Regarding reproductive rights and women’s health, Sherrill cites the importance of supporting robust preventive care programs, and says she is pro-choice and against defunding Planned Parenthood.

On Harris’ issues page, she shares such positions as:

Taxes, budget, infrastructure: Harris supports a simplified tax code that makes it easier for workers and small business owners to pay taxes, but one in which the wealthy and corporations pay a fair share. She is a proponent of investing in sound infrastructure for the region. Harris also points out the harm to educational programs caused by the current GOP budget (for example, a $2.4 billion cut to teacher-training grants and a $1.2 billion cut in summer/afterschool programs). She wants to explore ways to give college students “more options to graduate without debt and relieve existing debt.”

Health care: Harris is in the fix-don’t-repeal camp regarding the Affordable Care Act, citing access to affordable care as a priority. Tapping into her social-worker background, she stresses the importance of resources to treat mental illness, veterans with PTSD and others suffering from long-term trauma. With regard to reproductive health, Harris is pro-choice and supports fully funding Planned Parenthood.

Immigration: Harris supports protecting the “Dreamers” — young people brought to the United States as infants or young children — from deportation.

Gun safety: At the April candidate forum, Harris stressed her belief in the importance of resuming research on gun violence as a public safety issue (i.e. repealing the Dickey Amendment preventing such work by the Centers for Disease Control). She has said on repeated occasions she will be proud to earn an F rating from the National Rifle Association, supports universal background checks and an assault-weapons ban.

The issues page on Cobert’s website provides examples of his thinking on:

Wall Street regulation: Cobert’s positions tend to hearken to his background as a securities lawyer intent on addressing fraud and irresponsible practices.  For instance, this article, written after the market meltdown of 2008, makes clear his belief in ensuring individual investors have recourse in cases of shoddy investment practices.

Environment: Cobert opposes fracking and offshore drilling, and, like his fellow Democrats, would encourage developing sustainable energy options. He recently wrote about the fact that 43 percent of New Jersey water systems are privatized, saying private ownership raises questions about whether safety and health will be compromised by profit motives.

Gun safety: Cobert would encourage background checks, buyback programs and an assault weapon ban. He also supports other efforts such as closing the gun-show loophole (which exempts private sales at shows from Brady law regulations), and, like his fellow Democratic candidates, opposes conceal-carry reciprocity, which would require all states to recognize concealed-carry permits valid in any other state.

At his campaign website, Washburne’s positions on issues include:

Accountability: Washburne stresses the importance of Congress’ willingness to use its oversight power, and the importance of holding the executive branch accountable for its actions. As well, he emphasizes his rejection of campaign contributions as key to avoiding  being beholden to outside interests.

Healthcare: He’s a supporter of a Medicare-for-all approach to health coverage, saying that while the ACA improved coverage for many, it did not “end the debate on health coverage.”

Gun safety: Washburne’s gun-safety views mostly parallel that of the other Democrats in the race, especially support for background checks and reinstatement of CDC research on gun violence as a health issue.

National security: At the Madison candidate forum in April, Washburn expressed unabashed support for cutting military spending to free up funds for other areas.

Additionally, Washburne has expressed support for finding a solution that will allow DACA youth to continue residency in the U.S., and has also described himself as socially liberal, fiscally moderate. He invokes his perspective as a history professor in describing what is important to him about Congress and its role, as in this November 2017 statement, Why I Am Running.