The Rodney Report: On Doing the Right Thing

On Doing The Right Thing

A week after American Nazis marched on the city of Charlottesville, Rodney Frelinghuysen’s newsletter contained a statement that was nearly all that could be wished: pointed, clear and uncompromising in its refusal to concede legitimacy of any sort to Donald Trump’s both-sides-now equivocating. In its articulateness and power to move, the Friday newsletter statement was a world away from Frelinghuysen’s initial response on Monday — an inert, two-sentence post to his website.

“To be clear, the President’s assertion that there were two legitimate “sides” in Charlottesville last weekend is flatly wrong,’’ he declared Friday. “There can be no comparison – no equivalency - between white supremacists, KKK members and other racist fringe groups and those who showed up to challenge their bigotry, racism and anti-semitism.”

Perhaps opinions on Friday’s words will include terms such as gutsy, or forceful. There is an even more fundamental description: The right thing.

We only wish he would have done the right thing sooner. Frelinghuysen waited two days after the violence in Charlottesville before releasing his first, tepid statement against white supremacy late Monday afternoon. On Tuesday, he added a single sentence (punctuated by an exclamation point) to announce that Charlottesville protesters weren’t to blame before elaborating further in his newsletter.

In the meantime, the president’s economic council collapsed after several CEO’s left in protest, the 16 members of the President’s Committee on the Arts and Humanities resigned together, and several GOP lawmakers from Leonard Lance to Marco Rubio mentioned the President specifically in repudiating his comments.  But perhaps more influential to Frelinghuysen were his constituents,  who called his offices constantly, visited daily, tweeted by the hundreds and had multiple letters published in the opinion sections of local press, all calling for stronger action. There were also hundreds of vigils and rallies across the country. We wonder if Friday’s statement is responsive — at long last— to the opinions and beliefs of his constituents.

As 2017 marches into autumn, we will need, at every turn, elected officials to remain just as strong and clear in answer to anything that challenges what is fundamentally decent about our democracy. And we will need, as we do now, actions on the heels of such statements.

“Actions speak louder than words but not nearly as often.” - Mark Twain

Frelinghuysen  can start by joining the push to dismantle white supremacist hate groups. Earlier this year, the Trump administration cut off funds to organizations targeting right-wing extremists as part of the Department of Homeland Security’s CVE (Countering Violent Extremism) program. The FY 18 budget eliminates  CVE grants, including funding for organizations that guide hate group members to renounce their ideology and break ranks, in addition to preventing recruitment.  In February, the administration axed  all CVE funds in an effort to  refocus federal resources towards Islamist extremism only, dismissing the threat of White nationalists and other domestic hate groups. Sen. Cory Booker issued a statement against the the cut. Last week, Bill Pascrell called upon the department to re-examine the process of defunding CVE grants.  In the FY 17 Consolidated Appropriations bill, Frelinghuysen supported freezing additional federal assistance to these grant programs that counter domestic extremism. We hope he will now reconsider before the FY 18 budget is finalized in the house next month.

Frelinghuysen’s Democratic congressional colleagues in New Jersey have urged the Department of Homeland Security to hold hearings on white nationalist hate groups and pushed for bi-partisan efforts to stop them. Reps. Donald Payne, Bill Pascrell and Bonnie Watson Coleman both signed the letter to the DHS. 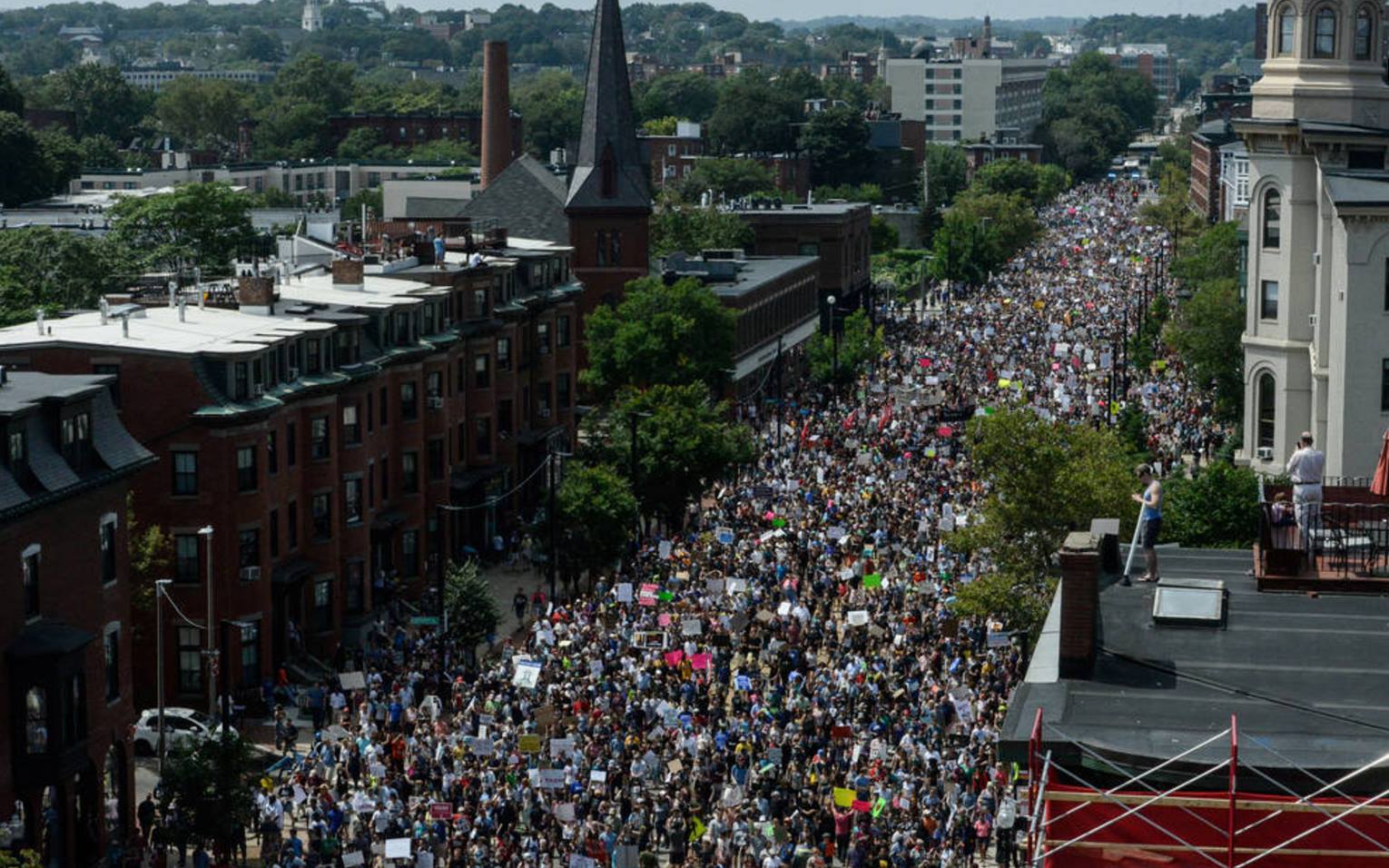 An estimated 40,000 people march against hate in Boston on August 19

"History will remember how we responded, not just in tweets and prepared statements, but through actions and a unified voice." Rep. Watson Coleman wrote last week, announcing her joint resolution for censure. It was signed by more than 100 Democratic congressional reps at last count, and all NJ Democrats except for Rep. Josh Gottheimer. Frelinghuysen should also support efforts to censure President Trump in light of his response to Charlottesville. Watson Coleman's resolution included a call to "fire any and all White House advisers who have urged him to cater to the white supremacist movement in the United States.’’ It cited  Steve Bannon, former publisher of Breitbart News, who on Friday resigned as Trump’s advisor, and advisor Sebastian Gorka, who has expressed his affiliation with an Eastern European group that has historic links to Nazi Germany.

We would add another name to the list: Trump advisor Stephen Miller, who played a major role in crafting Trump’s Muslim ban and deportation policies. Notorious Neo-Nazi Richard Spencer, an organizer of the Charlottesville rally, claims Miller as a college buddy and former mentee from their days at Duke University a decade ago.

Frelinghuysen can endorse efforts like “The Compact,’’ a project announced Friday by the U.S. Conference of Mayors and the Anti-Defamation League. Signed by over 400 mayors, including Montclair’s Robert Thompson, it calls upon cities to strengthen civil rights laws, log hate crimes and explore community efforts to combat racism.

If Frelinghuysen is truly intent on abolishing white supremacy in the U.S. he must work to overturn policies that align with the white nationalist agenda. These include White House plans to sue colleges whose affirmative action admissions policies result in “race-based discrimination.” (Yes, that means ‘discrimination’ against white students.)

Frelinghuysen can also reject funding for Trump’s anti-immigrant mission, which brutally punishes and excludes minorities. These include an enormous increase in resources devoted to deportation and detention efforts and Trump’s proposal to limit legal immigration via a “merit-based” system. Our representative must commit himself to ending Trump’s Muslim ban, the spirit of which he supported. All of these policies are ardently championed by neo-Nazis and other right-wing extremists who revere Trump.

Frelinghuysen has the power and position to fight for the rights and protection of ALL Americans, and though we have often been in doubt, Friday’s statement shows he has the capacity. It is not too late for our congressman to courageously step forward and defend the American ideals of equality and freedom from tyranny.