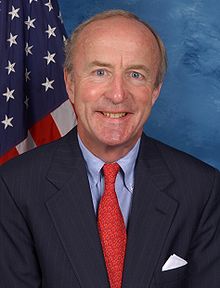 Drastic cuts aren’t the only thing we’re seeing in this budget. Among other increases, the proposal includes an increase of $54 billion in military spending, about 10 percent over this year’s approved $558 billion. An estimated 5 percent will go to “base-budget” programs, some of which is likely to end up at Picatinny Arsenal here in the 11th, and over $13 billion in the request would be spent on new helicopters, fighter jets and defense systems.

It's worth noting that Rep.Frelinghuysen’s number one donor is Lockheed Martin, the nation’s top defense contractor and maker of military helicopters and fighter jets; his second biggest donor is Northrop Grumman, the world’s largest builder of naval vessels which specializes in aerospace and other defense systems.

In his Friday newsletter, Rep. Frelinghuysen also noted that March is Women's History Month — without addressing the discrepancy between his claim to support women’s rights and his universal votes against women’s health and reproductive freedom over in recent years. He is currently rated at 11 percent by Planned Parenthood Action.

Mark your calendar: Rep. Frelinghuysen has announced a new time for his snow-cancelled Telephone “Town Hall” now scheduled for Monday 5 PM. Sign up on his website on the shiny new “Telephone Town Hall sign up button”and pride yourself, this is actually the very first Tele-call in the history of his 23 years in Washington for which he has given a time in advance. Read our tips on getting your questions asked and answered here.