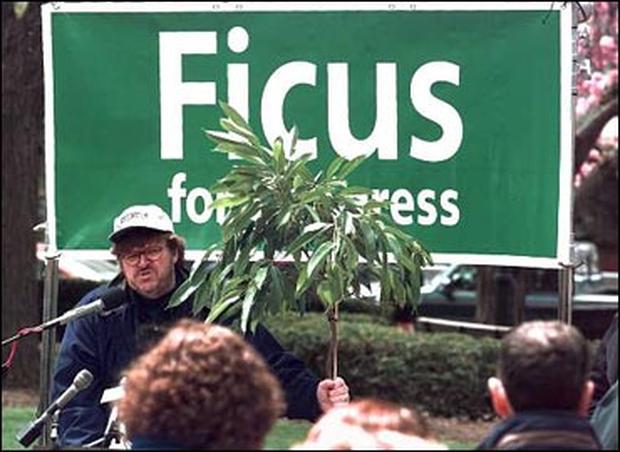 When and his team failed to get Candidate Ficus listed on the official New Jersey ballot, they launched a website urging NJ 11 voters to join a write-in effort for “the photosynthesis candidate.’’ (State Division of Elections officials were unmoved by Moore’s contention that in addition to Frelinghuysen, voters deserved an eco-friendly alternative.)

Frelinghuysen took the Ficus campaign in stride, calling his opponent “truly green when it comes to politics” in a May 28 story in the Camden Courier Post.

While Moore’s cable show focused on Frelinghuysen, the Ficus movement spread to a total of 24 congressional districts. “Ficus for Congress” includes scenes from the National Ficus Convention, in which the political plants gathered onstage in an unprecedented display of unity, greenery and potting mix. (The Ficus from Texas naturally wears a cowboy hat.)

As the documentary covers primary day, tension mounts as the votes are counted, with Moore and crew heading to the Morris County Clerk’s office for a late-night showdown over tallying the write-ins for Candidate Ficus.

“We’re not focusing on the write-in votes right now,” explains the county clerk, who also “respectfully disagrees” with Moore over the value of the Ficus campaign. A local newspaper reporter seems underwhelmed at Moore’s urgings to launch an inquiry into the Ficus results.

Not that the outcome was ever in much doubt. While scattered (and probably tongue-in-cheek) internet polls had Ficus ahead by wide margins, Frelinghuysen won by a landslide. Moore and the Ficus campaign had to content themselves with being a satirical footnote in the Election 2000 story.

The potted candidate didn’t go to D.C. But Moore got his point across. "Most candidates run unopposed in their primaries and 95% are re-elected every time in the general election,” he told Democracy Now that June. “What we get from these Congressmen-for-life is a lot of hot air, a bunch of promises that are never kept, problems like health care and education that are never addressed, more taxes for a bigger military when there are no wars, and a bigger paycheck for Congress when they don’t deserve it."

The “Ficus for Congress” episode can be viewed in YouTube (it’s split into three parts):

Part 1: Getting on the ballot

• Peggy Wright, the Morristown Daily Record reporter buttonholed by Moore during the vote tallying on primary night, continues to cover Morris County for the paper. She has won awards for coverage of domestic violence and consumer fraud, and went viral with a 2014 story on a Morris County high schooler who sued her parents for college tuition.

• A much sadder epilogue: Joan Bramhall, the Morris County clerk and GOP party stalwart who dueled with Moore over counting the Ficus write-in vote, was killed in 2014 by her husband in an apparent murder-suicide. In 2015, the children’s room at the Morris County Library was dedicated in her honor.