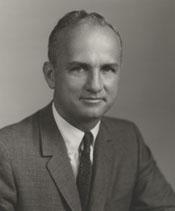 In stark contrast, Rodney, who, like his father, proclaimed himself a moderate Republican, has actively supported the Trump agenda or remained silent, joining the ranks of complicit GOP leaders. This month, he was also criticized for his attempt to intimidate an NJ 11th for Change member who spoke out against him by outing her to her employer in a written note.

The forces that bred and sustained McCarthyism are familiar to us in the Trump era. While the president has capitalized on fears of terrorist attacks, the post-war era was filled with anxiety over nuclear annihilation. Communism was viewed by many GOP members as an ideological threat to America, just as Islam is today. McCarthyism’s blow against freedom of speech and expression, its attacks against intellectuals, organized labor and foreigners, also seems to foreshadow the Trump agenda.

The groundwork was laid in 1947, when President Truman ordered background check of government workers after Alger Hiss, a senior State Department official, was convicted of being a Soviet Spy – charges he denied until his death. Executive Order 9835 required federal employees to be screened for disloyalty, defined as membership in any group the government deemed “totalitarian, fascist, Communist or subversive.” The House Un-American Activities Committee, founded in 1938, had a similar mission to route out Communists.

Sen. Joseph McCarthy of Wisconsin crusaded against Communism as a moral scourge that pitted atheism against Christianity. In a famous 1950 speech in Wheeling, West Virginia, he referred to “the enemy within.’’ The enemies were “card-carrying communists” who had infiltrated the government, the military, the clergy, labor unions and academic institutions, according to McCarthy. In a parallel crackdown to the “red scare” — referred to as “the lavender scare,’’ ’’ — homosexuals were denounced as security risks and Communist sympathizers, leading to mass firings of gay people.

McCarthyism encompassed the infamous Hollywood “blacklisting,” which resulted in hundreds in the entertainment industry losing their jobs while others were questioned before Congress, often for joining the Communist party in the 1930s, when it was a popular Hollywood political affiliation. Screenwriters, composers and actors, such as Paul Robeson, Dorothy Parker, Charlie Chaplin and Leonard Bernstein were blacklisted.

The tide began to turn against McCarthyism in 1954, when McCarthy mounted a campaign to weed out Communists from the U.S. Army. He grilled a raft of army officials, including many decorated war heroes, in hearings broadcast on network TV. Audiences didn’t like what they saw as McCarthy bullied and insulted witnesses.

That same year, freshman Congressman Peter Frelinghuysen Sr. penned a statement to his colleagues. “By remaining silent we permit the public to believe that most Republicans condone the senator’s tactics,” he wrote. “By remaining silent we lend credence to the view that we prefer to risk losing our freedom than to offend a questionable ‘asset’ to our party.”

On December 2, the Senate voted to censure McCarthy and the witch hunt drew to a close.