Yesterday, NJ 11th For Change released a statement urging Frelinghuysen to break his silence.  “In times like these we look to you 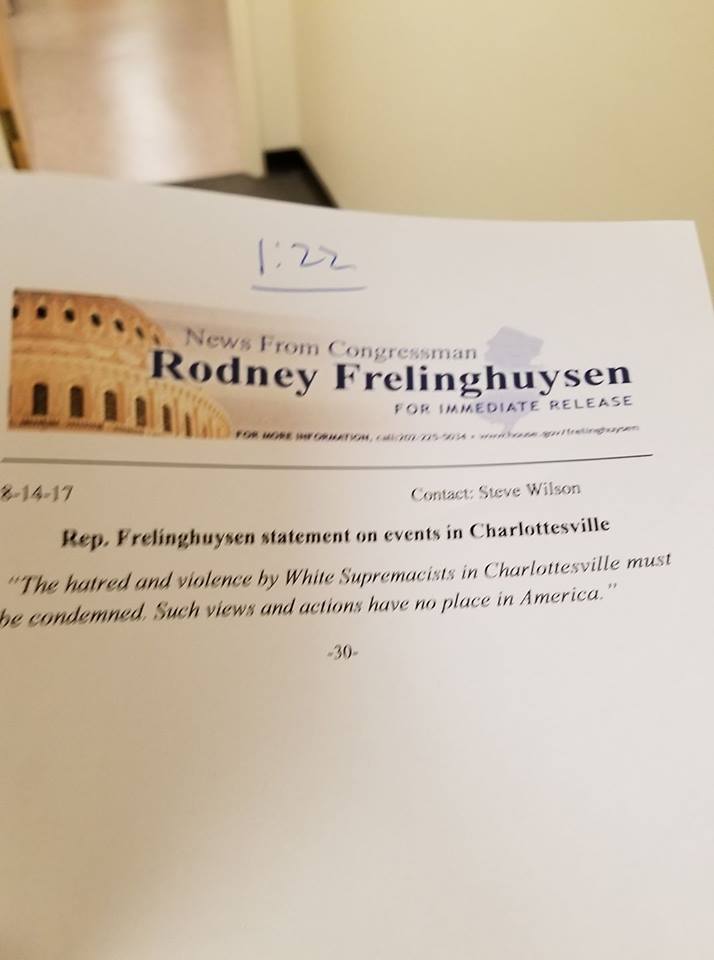 to represent our values by using your voice to condemn hatred and protect the safety of all citizens.  This is a matter of morality not politics …We ask that you clearly and unambiguously condemn white supremacy and all bigoted hatred.  We ask that you condemn the domestic terrorists who took over the streets of Charlottesville this weekend.  We must stand with and for each other in peace and acceptance.” NJ 11th for Change also held a candlelight vigil on Sunday with over 400 in attendance in support of the Charlottesville victims. The gathering was one of over 770 last night in every state across the country according to Indivisible .  There is no report that Frelinghuysen attended any of them.

Although President Trump initially refused to single out white supremacists when he condemned the violence, attributing it to “many sides,’’ politicians nationwide, including several Republican leaders and rank and file members, emphasized the importance of specifically repudiating white supremacists and their ideology.

In February, Frelinghuysen spoke out against nationwide threats targeting Jewish synagogues and community centers, but he has made no other comments against racist speech and violence — despite a well-documented rise in white nationalist hate crimes since Trump’s election. According to the Southern Poverty Law Center, which tracks hate groups, New Jersey now has 15 active hate groups, putting it on par with Louisiana (14), Arkansas (16), Mississippi (18), and South Carolina (12).

In addition to Frelinghuysen’s belated and minimal stance against white supremacist hate groups, he is helping to thwart efforts to combat them.  In June, although he supported an expenditure to fund the Department of Homeland Security’s Countering Violent Extremism (CVE) program (see H.R. 244 House Floor Statement), DHS later defunded the only group working to fight white nationalism. Trump wanted to scrap the CVE program entirely, before flirting with the idea of rebranding it the “Countering Violent Islam Extremism” (sic) program. Life After Hate, an organization focused on working to de-radicalize members of racist activist groups, was promised $400,000 under Obama but the Trump administration suspended the grant and issued new awardees.  Meanwhile, no additional funding was requested or included in the House DHS appropriations bill (H.R. 3355) for next year, effectively ending federal funds for domestic CVE program grants. Frelinghuysen’s apathy when it comes to standing up against white extremist terrorism speaks volumes.

With attention riveted upon the glare of homegrown Nazism in torchlight in Charlottesville this weekend, the roiling debate on immigration slipped off front pages.

But the Trump administration’s new immigration rubric remains a major departure, as was the sight of a White House spokesman disavowing Emma Lazarus’ famous description of the U.S. as haven of “huddled masses yearning to breathe free.” (“Not actually part of the original Statue of Liberty,” said White House aide Stephen Miller, a close associate of the notorious Steve Bannon and a key author of the Trump travel ban.)

The RAISE Act (Reforming American Immigration for Strong Employment) would slash legal immigration by nearly 50 percent over the next decade, ending prioritization for family members of legal immigrants and imposing a points system heavily weighted toward wealth, high educational levels and relative youth (over 50s need not apply). RAISE also cuts  the number of allowed refugees to 50,000, down from the 110,000 which former president Barack Obama had pledged to admit per year.

Trump’s RAISE is more like a RAZE for America’s traditional “golden door.”

Xenophobia is one of the pillars supporting white-supremacist ideology. In October 2016, former KKK grand wizard David Duke praised Trump’s war on immigrants, telling ABC News: “If the massive immigration continues … the majority of the American people are going to become outnumbered.” He had no problem clarifying what he meant by the majority: "To be frank about it, the white people.”

Closer to home, Frelinghuysen’s voting stances have been depressingly in line with the Trump vision of immigration. The congressman’s responses have been at best muted and at worst acquiescent on the Muslim travel ban, the extravagantly expensive border wall, and targeting of so-called “Dreamer” immigrants – young adults and teens brought to the U.S. as toddlers who now face deportation at the hands of a highly xenophobic White House.

On Friday, NJ 11th For Change will participate in a day-long event highlighting these and other impacts of the current federal budget, as well as Frelinghuysen’s voting record. Other organizations partnering in the event include Wind of the Spirit and Make the Road NJ. Activities will take place in Morristown from 11 a.m. to 5 p.m. – It’s a chance to meet fellow constituents, to take a closer look at immigration proposals that represent a profound change in a cultural and historical status quo, and to consider what a responsive representative might do in these times. 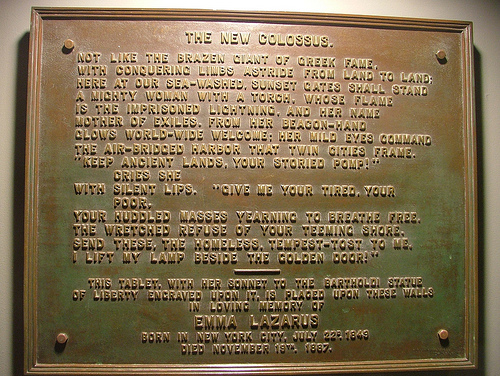 While Frelinghuysen was on a taxpayer funded trip to Thailand and Sri Lanka, President Trump vacationed in New Jersey this week. If any of us hoped we could take a few days off from the crazy coming out of Washington, we were wrong. Sadly, a few rounds of golf at his Bedminster club couldn’t keep Trump from starting a war of words with North Korea. His aides claimed (accurately it seems) he was in a “bellicose mood.” Trump’s response to North Korea’s ramping up of its missile tests was to threaten them with “Fire and fury like the world has never seen.” This apparently improvised statement had echoes of the one Harry Truman gave after dropping the atom bomb on Japan. Indeed, his off-the-cuff remark was made on the anniversary of the bombing of Nagasaki, lending more weight to the notion that the President of the United States was threatening nuclear war. Hope that more temperate language would be used upon further reflection was dashed the next day when Trump doubled down, tweeting about updating our nuclear arsenal and reiterating that it was “locked and loaded.” As for the supposed revamping of the arsenal? A Four-Pinocchio rated lie, the President who actually did this was named Barack Obama.

North Korea and Trump have been having an on-off war of words throughout the course of this short, (yet seemingly endless) administration. Remember the news that a carrier was steaming towards the North Korean coastline? Within days, that story was debunked. So there was hope that this escalation would prove to be as short-lived. Unfortunately, those of us hoping for cooler heads to prevail were not reassured by Secretary of Defense James “Mad Dog” Mattis’ statement that the DPRK should “stand down its pursuit of nuclear weapons” or it would “lead to the end of its regime and the destruction of its people.”

To give this some historical context, North Korea’s nuclear program has been an issue for the international community for years. The best hope we had was a Clinton era deal, The Agreed Framework that would have given North Korea nuclear reactors in exchange for regular inspections by the Atomic Energy Commission. That fell apart during the Bush era when hawks in the administration argued against the agreement and pushed for our withdrawal from the International Non-Proliferation Treaty.

Many pointed out the odd timing of Trump’s ramped up rhetoric. The United Nations has just imposed harsh new sanctions against North Korea. Trump barely let the ink dry on them before making these threats. Of course, just as we were gathering supplies for our underground bunkers, our president turned his attention to another foreign policy issue. On Friday he threatened to send troops to Venezuela, so who knows what Monday will bring? There’s a great big world out there, after all.

There were voices of sanity raised in response to all this war-mongering, Congressman Ted Lieu pointed out that, having been an active duty serviceman in the Pacific there were “zero good options” when it came to going to war with North Korea. Many others in Congress called for a rational, diplomatic approach. Sadly, that would be tough since the administration has yet to nominate an ambassador to South Korea. Still, before we send our troops off to fight in battle, it’s critical that every other avenue be pursued. We can’t ask our citizens to die in a war that could have been avoided, blundered into by a President who apparently decided to make some off the cuff remark. Our Congressman knows that first-hand, having served in the military. As with so many issues, we need to know where he stands.